AXA is a French multinational insurance firm chiefly active in the fields of insurance, investment management and other financial services. A majority of their operations are in Western Europe, Africa, the Middle East, North America, and Pacific Asia. Headquartered in the 8th arrondissement of Paris, AXA is a conglomerate of independently run businesses.

In 2013, AXA Wealth was fined £1.8 million by the FCA for failing to ensure it gave suitable investment advice to its clients in Clydesdale Bank, Yorkshire Bank and the West Bromwich Building Society.

In May 2016, AXA announced that it would no longer invest in tobacco shares and bonds, and that it would allow its portfolio of tobacco-related bonds run off.

Examples of AXA operations around the world

AXA in the United Kingdom 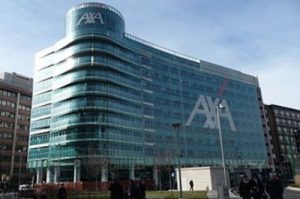 AXA PPP Healthcare, which has its roots in The London Association of Hospital Services, sells individual private medical insurance for individuals, businesses and organisations.

AXA PPP International is focused on health insurance for expatriates.

AXA on the Isle of Man

AXA Isle of Man Limited is a repository for UK and Channel Island citizens seeking to benefit from the tax laws of Isle of Man.

AXA Insurance Ireland is the third-largest general insurer in the Republic of Ireland. It was formed in 1999 when AXA acquired the British-based Guardian Royal Exchange, thus becoming the owners of Private Motorists Protection Association which at the time was one of Ireland’s main insurance companies.

AXA in the Middle East

In the Middle East, AXA operates through AXA Insurance (Gulf) B.S.C, except for Saudi Arabia where AXA is represented by AXA Cooperative Insurance and in Lebanon where AXA Middle East is active.

AXA is the largest insurer in the GCC region (the Arab states of the Persian Gulf, except Iraq) and has been active in this region for over 60 years.

Since 2014, AXA has acquired several local insurers to expand on the African continent. They have also started new ventures, and in 2016 AXA announced a partnership with Lloyd’s of London insurer Chaucer Holdings to enter the specialty insurance market in Africa through the company AXA Africa Specialty Risks (AXA ASR). Specialty insurance is a strongly growing market in several African countries, and AXA is focusing hard on offering excellent coverage and on-the-ground presence.

AXA in the United States

In the United States, AXA operates through the company AXA Financial Inc. This company has several subsidiaries, including AXA Equitable Life Insurance (Equitable was acquired in 1991), AXA Network, AXA Advisors, AllianceBernstein, US Financial Life, and MONY (Mutual of New York was acquired in 2004).

AXA in the Asia Pacific region

On many markets, AXA operates through joint-ventures with local partners.

In 1985, the company changed its name to AXA since the internationally expanding company wanted a name that could be easily pronounced worldwide. AXA is not an acronym; the name was created by an outside consultant tasked with finding a name that was short and snappy, conveyed vitality and was easy to pronounce.

Examples of acquisitions from 1990 and onward: